TOGGLE SPOILERS
SPOILERS ARE ON

This page is about the character. For the game title, see Deemo.

Deemo is the supporting character in the game, as well as the character that the player controls in the rhythm sections in the Piano Room, Basement and Top Floor.

At the start of the game, Deemo is shown alone in the Piano Room, with a piano before them. After playing a song, the Little Girl falls down from a window above, and they react quickly to catch the girl. Although Deemo does not know much about the girl, they help her get back home by playing the piano to grow the tree in the Piano Room, so that it would reach the window she originally fell from.

Throughout the story, Deemo never speaks. According to the Little Girl in Deemo -Last Dream-, it is not because they do not want to speak, but rather cannot speak. Not much is revealed about them in Memories; their personality only shows through their actions. They are observed to be caring and kind towards the Little Girl. They also seem rather carefree, leaving their books strewn across the floor in the Library.

In Last Dream, Deemo is shown to have a comforting presence on the Little Girl and is able to effortlessly lull her to sleep. The Little Girl also states that their body feels cold to the touch, like ice.

They also make occasional appearances in other rooms. In the Library, they can be found sitting on a stool, reading a book. They cannot be found at the Attic at any time.

In the story, it is revealed that Deemo and the Masked Lady were acquainted with each other long before the Little Girl appeared.

At the end of the Main Story, Deemo is revealed to be the Little Girl's (Alice's) mental manifestation of her older brother, Hans. In the real world, Hans had died protecting Alice from an oncoming truck when crossing the road. 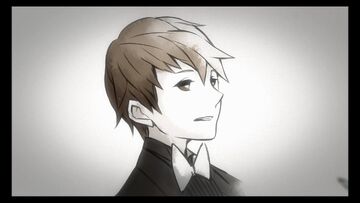 It is revealed in Last Dream that Hans had become a professional pianist two years prior to the accident when he won an open piano championship. He was 17 on the day of the accident, and was walking with Alice in the Sakura Forest to attend her piano championship when the accident occurred. His last words were “Alice... Do you remember... what we promised...?”

Forgotten Hourglass playthroughs follow Alice's journey in reliving her memories of the Main Story to come towards the acceptance of Hans' demise.

Deemo only appears as a black silhouette without many features. They have a tall, slender figure. On their face lies two white dots as eyes, and on their upper torso is a hint of a suit with a white bow tie. Deemo's arms are disproportionately long, with lengthy, pointed fingers, especially noticeable when playing the piano. No discernible expressions can be observed from Deemo throughout the game.

SPOILER
Community content is available under CC-BY-SA unless otherwise noted.