Deemo is a rhythm game, similar to Cytus, Tap Tap and other rhythm games. It has the piano as its main theme. Players tap or slide the notes that fall downwards from the top as they land on the judgement line at the bottom of the screen. 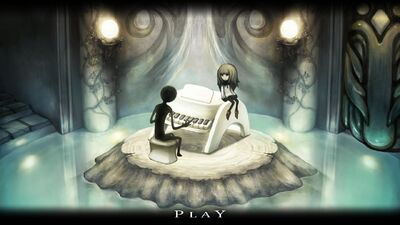 Tap the screen to go to the Piano Room. This room has a door on the left and a door on the right, leading to the Library and the Attic.

The Settings menu is located at the bottom-right of the screen, which allows you to adjust certain aspects of the game to suit your preferences. 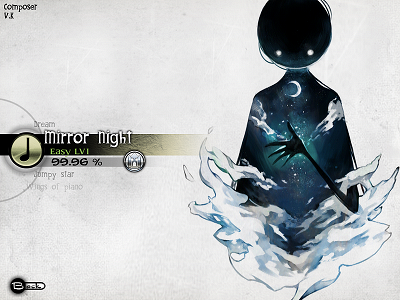 To change the difficulty, select the note icon beside the song title. Most songs have 3 difficulty settings (a select few have 2 or 4). For beginners, LV1 to LV4 is recommended.

Sliding up or down on the screen scrolls through the songs. Tapping the screen selects the song and a volume/speed customization window will appear:

The speed determines the time in which the note appears and the speed it falls from the top of the screen to the judgement line. It ranges from 0.5 to 9.5, with a slider to change it in increments of 0.5.

Pressing "Start" here will lead to the Game Screen. 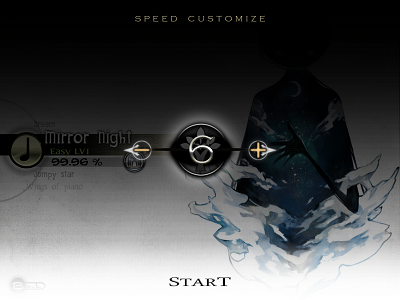 This screen is where the rhythm component of the game is played. The bottom line is the judgement line which notes will fall towards from the top of the screen.

The small glow moving rightwards on the white line below the top bar indicates the progression of the song. The glow colour corresponds to the difficulty level being played.

Tapping the Pause (eighth rest) icon at the top-right corner of the screen or anywhere on the top bar pauses the game:

Through this menu you may:

There are two types of notes that fall from the top of the screen towards the judgement line.

These notes have dark bodies, and must be tapped as close to the judgement line as possible. They follow the piano keys and produce piano key sounds when tapped.

There are special tap notes which also have dark bodies but with white centers. These notes do not follow the piano keys; they instead follow the sound effects, vocal syllables, or instrumental keys aside from the piano's. They do not produce piano key sounds.

These notes have yellow bodies, and must be slid over with a finger/ fingers as they land on the judgement line. They follow the piano keys and produce piano key sounds when slid over but can also have non piano sounds when also slid over.

Players can also tap on these notes, but for faster songs, it may be easier to slide. Slide notes behave exactly like Tap notes if tapped. Leaving your finger unmoving on the screen to "catch" slide notes does not work as they are only considered hit by motion.

Depending on how close a note is to the judgement line when it is tapped, 6 different judgements can be obtained:

Judgement is independent of the speed of the song. Playing at a higher speed results in higher tolerance of note distance from the judgement line.

There is no point-scoring system in Deemo; performance is instead represented by a percentage rating. This rating appears at the top-right corner of the screen during gameplay.

Hits are also worth more when the combo counter is higher. For this reason, a single combo of 100 hits is worth more than 2 separate combos of 50 hits each. The best rating on a song is displayed under the song title and difficulty in Song Selection.

There are some titles obtainable for displaying mastery over a certain difficulty of a song. Obtaining a title causes its icon to be displayed next to the song's best rating during Song Selection.

A Full Combo (FC) is achieved when:

Normal hits do not break the combo, therefore they do not prevent Full Combo.

An All Charming (AC) is achieved when:

An All Charming is equivalent to a 100.00% rating and supersedes a Full Combo.

After completing a song, the result screen will be displayed:

There are several elements on the result screen:

Community content is available under CC-BY-SA unless otherwise noted.